There are some omelets that are made for Saturday and Sunday mornings. Mega omelet, aka hangover omelet, is one of them. You certainly do not have to be hungover to eat it, but it will probably taste even better if you are. It's a massive indulgence and it's so cheesy and meaty and fluffy you can't stop once you've started eating it.

Here's the thing. Omelet making can be intimidating and I understand this. How many eggs? Butter or olive oil? There are methods to choose from. When you're at a diner, they're cooked on a flat top grill. It's still raw on top when the sides get folded in. I don't like runny omelets, so this doesn't work for me.

The French method has us rolling the omelet in a cylinder - still too wet for me. The cook and roll is also a more advanced culinary technique that is much harder than it looks.

I love the flip omelet method. Mega omelet, aka hangover omelet, is stuffed with a lot of deliciousness. When you steam it then fold it, the puffiness and fluffiness is omelet perfection to me.

The flip omelet is my go-to method for sure. My undergrad degree is in hospitality management. While I was in school, I learned how to make a flip omelet. I've tinkered with this method over the years, and I've learned a couple of tricks. 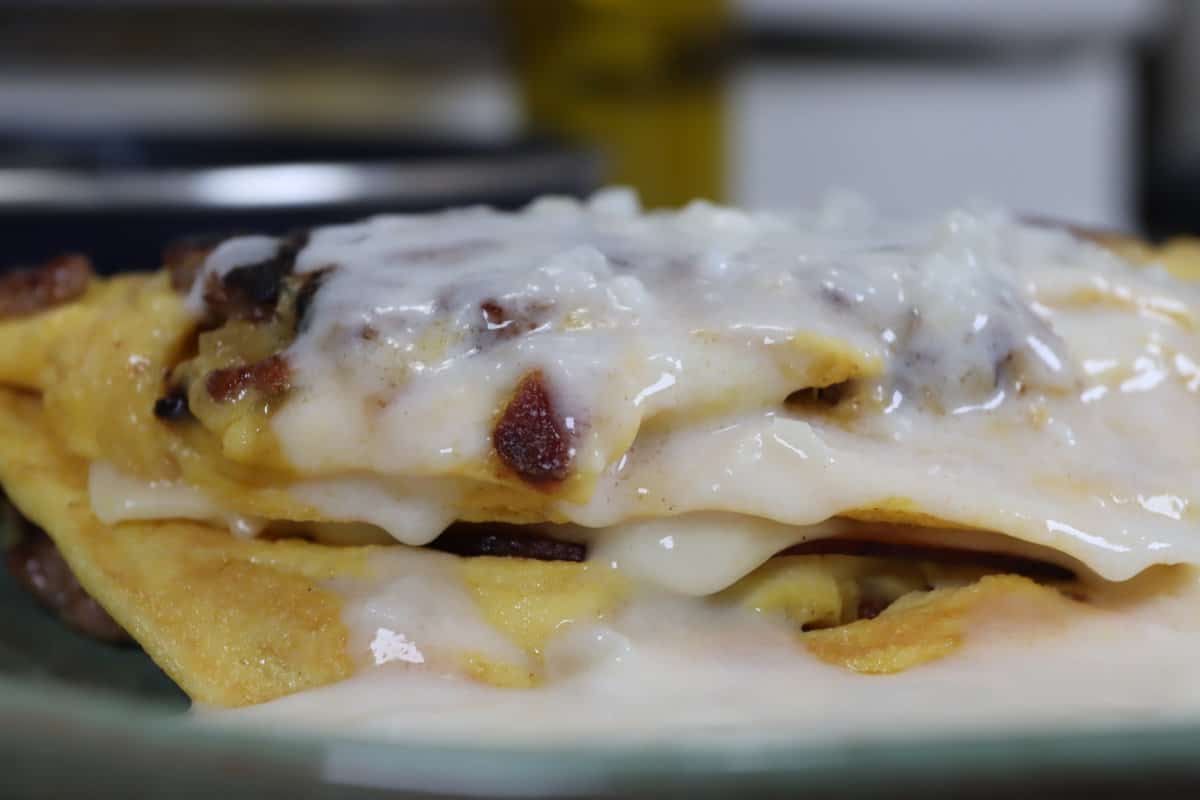 You can't make an omelet without breaking a few eggs

The Origin of Mega Omelet

The origin of the Mega Omelet is all about Christmas breakfast. Our tradition is fried dough in the morning. However, my sister's boyfriend doesn't like fried dough so we needed to have a different option. I suggested I could make an omelet and he was receptive to that.

Luckily, I usually have bacon, ham or breakfast sausage in my freezer. Mega omelet can be made with anything you want. You want mushrooms? Throw some mushrooms in. Peppers? Why not? Whatever I have on hand - it's going into mega omelet. The cheese is important too. On Christmas eve, we usually eat chicken cordon bleu for dinner. In addition to whatever cheese is getting stuffed in the omelet, I pour the remaining cheese sauce from the cordon bleu on top. It's insane. I'll leave the link for the cordon bleu recipe below so you can see how the cheese sauce is made. If you don't have time to make that sauce throw a slice of Swiss or Cheddar on top of the omelet and let it melt before serving.

So, whether you're hungover and craving a big, meaty cheesy omelet or just preparing breakfast for friends and family - mega omelet is the omelet to end all omelets. Be brave and remember: you can't make an omelet without breaking a few eggs.

If Mega Omelet is too much omelet for you, feel free to try my simple cheese omelet instead. I've also got a totally awesome Western Omelet you should check out too! Happy Scrambling!

Mega omelet is all about putting everything but the kitchen sink in an omelet. Breakfast meats, onions, lots of cheese – whatever you have on hand – you can probably put it in mega omelet.

After that – it’s time to indulge! Enjoy!

Want to hear about more deliciousness from Eat the Bite?

Sign up for my newsletter and never miss a recipe!

I'll send the latest and greatest right to your inbox!

Do You Love Chicken? Here's a Few Recipes to Keep You Busy:

As an Amazon Associate, I earn from qualifying purchases.